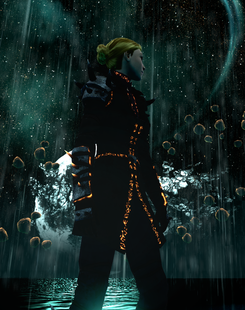 As far as the vast majority of the world is concerned, Ariel (first name Vasilisa) is a descendant of Dobrynya Nikitich and born secret worlder.

The warrior tradition roots in her family run deep. In an age of heavy arms and gunfire, she received traditional knightly training until roughly the age of fourteen. For several years, she worked independently as a monster hunter and came into contact with Templar agents during a number of her hunts across Slavic territories. When presented the option to travel across Europe as a hunter, she accepted and came under their employ.

Her alliance with them (she never figured to be a true, card-carrying Templar) came to an abrupt end on August 1st, 2017 after thirteen years of service, citing lack of interest in dealing with the new generation of hunters or working alongside of Bees.

Ever since, Ariel has worked for a number of different companies but has never made her loyalties clear. Her business cards index Slaying, Mercenary work and Private Security as her primary aptitudes, with her prices for negotiation during appointments only.

Her aura (or the manifestation of her Tao) pulses a smoky, seamless black. It's concentrated around her figure and seldom extends past her fists. Perhaps unconsciously, she seems to draw it into herself. It signifies focus, directed energy, fine-tuned concentration and a complete lack of fear bordering on carelessness of lack of value for life.

Those with talents such as clairvoyance, mind-reading or paranormal empathy would quickly realize that they cannot perceive her. All attempts to get a reading on her seem to fail one way or another.

Standing at 6'1" of full height, Ariel is 185cm of clear and pure wizard-hating rage. Her form is one of lean and sinewy muscle, with much of her strength concentrated in her upper-body due to her weapons of choice: the longbow and a variety of polearms.

High cheekbones and a round face framed by blond hair, arresting blue eyes with a hawk's focus and fair skin make for an obvious Russian. Bruises come and go, and it's always easy to tell how ago it was when she last hunted judging by new nicks and bruises.

Ariel's use of traditional weaponry seems to be almost exclusively for use when hunting monsters or participating in tournaments because in spite of her extreme proficiency with their use, she is very rarely ever seen to be carrying them.

Her standard equipment consists of light armor with runic accents. Her weapon of choice appears to be the VSS Vintorez or its primary variant, the AS Val. On a fairly regular basis, she has been known to carry a riot shield decorated with a number of arcane wards.

With her own, Ariel is warm, friendly and eager to front the bill. She has a long track record of hedonism to accompany her highly addictive personality. Her streak of loyalty, extreme courage and bravery is restricted to those she would call her comrades and close friends. 'Comrades' isn't necessarily Phoenician-bound, either and is instead defined as those who share the field operative struggle.

Her disposition with those she dubs 'civilians' is spotty. Ariel's fondness for dark and military humor has alienated more than a few to such a degree that she almost entirely refuses contact with them. Nonetheless, there are a few that she keeps in her company but they are treated with a certain degree of distance.

For all of her qualities, she's also a very paranoid individual and openly hostile towards magi, who she attempts to avoid at all costs. Her lack of strong moral grounding paves the way for inter-personal conflict with those more heavily invested and guided by virtue.

TRANSMIT – initiate the iron prayers – RECEIVE - nostalgia for the absolute – SING IT TO THE AUDIENT VOID – initiate the sparagmos signal – I HAVE A RAGE IN ME THE LIKES OF WHICH YOU WOULD NOT BELIEVE – behold the warrior, the storm – WITNESS – The Fateweaver

What is time to us? We stand outside. Everything has happened. Everything is happening. We smell the woodsmoke and iron, and we are there.

Initiate the long ago...

In a time before time, when humans openly consorted with demons, we watched a young girl laugh and play with monsters. Spared of the complex web of morals that bind the minds of her elders, we spied an innocence that quickly turned to cruelty.

Her human playmates were so fragile, sweetling, and here were so many puddles to be played in when she was done. While she pulped skulls with sleight of hand, mother and father praised their child as a prodigy.

Was she truly their child? That girl's true name is best conveyed in the tongue of demons. Was it always so? We are the information protocol and even we do not remember.

WITNESS - A skip of heartbeat

That poor girl soon fell prey to the dissatisfaction curse, the lowest common denominator in your biology. That curse hatched such awful ideas in her mind. WHEN YOU COME BACK YOU WILL NOT BE YOU. What would you do for a taste of eternity, sweetling?

We were there when a magus carved the old runes into her flesh and split her tongue. We watched as she bled through her smile before eating of her heart. There was such desperation in her then, such hunger for entropy, such longing for the sight of burning cathedrals beyond the deep artifices of night.

We were there the first blood sacrifice. See her own entrails strewn across an altar. Listen to the pitch of screams. So much agony, so many tears. Watch the savage glee of the monsters that raised her. Witness as one eats of her heart and she of his.

We witnessed all of her sacrifices. Heart, body, mind. Soul.

We were there when she betrayed her own race and joined the demons in their fight. We witnessed her terrible skill with the arcane and how she wielded it against her former kin.

We were there when the world came undone. We saw her in the Hearteater’s arms. We watched as he shielded her when the air filled with dust and the world turned to rust. Once. Twice.

Initiate the present. Our sight is always hind.

How did she trick our careful perception, sweetling?

We can tell you only this, o’ honeyed friend…

Her name was digested by a monster.

How do you hope to stop her, when the armies of Hell march against you again?

I’ll deal this one to you straight. Don’t I always? This one’s name ought to be “Fausta”. Ring any bells? You should try calling it twice at the doors of Hell and see what answers.

It’ll be a monster, Chuck. The tooth and claws just aren’t immediately obvious. You have to survive the honey-sweet of precious little lies and warm smiles before catching a glimpse of those.Think you can do it?

You wouldn’t last five minutes with this one, Chuck. I’ve been listening to her static on the sly. She makes such sweet music when she carves through meat, has such a sharp-toothed smile when she sees all that red-red blood. How could I resist peeping? Her frequency screams ruin-ruin-ruin.

She’s not your type, Chuck. She’s mine. Think she’d let my me’s take her to dinner?

KNOWN ANIMOSITIES: She harbors intense and fervent hatred of magic and is, on occasion, outwardly hostile towards magi, allied and otherwise.

EARLY LIFE: Ariel was born and raised in a family of secret worlders. The Nikitich family is composed primarily of monster hunters and "Dragon Slayers". In spite of numerous advancements in technology, Ariel, much like her cousins, received traditional knightly training and figures to be a professional-level archer, among other things.

CURRENT REMIT: Ariel worked as an asset and ally to the Templars for thirteen years before stepping down suddenly on August 1st, 2017. Instead, she currently works as an independent, private contractor, consultant and information broker. Her official pricing list indexes Slaying, Mercenary & Private Security as her primary aptitudes and offers, others are "for discussion during private appointments".

EXTRACURRICULARS: When not seeking to sate her hedonism, she has been known to globe-trot via traditional methods of aerial transportation. Though she travels constantly and lingers wherever the layover occurs, Ariel appears to largely avoid contact with others. She appears to make use of the same pilots in a recurring fashion and rarely strays from her inner circle.

Excels at trumping magic. Attempts at getting readings of her via Clairvoyance, True-Sight, Truthsense and Telepathy have all failed drastically. Reports detail that it was impossible for our teams to get any kind of reading, as if the 'signal reception' was compromised somehow. Visions of events in which she participated are allegedly so muddled that they are indecipherable.

ACTIVITIES IN THE SECRET WAR: Ariel is presumably currently under the employ of Leviathan Industries as a consultant and security provider for BLACKWELL, ARKHAM. Her other activities primarily include reconnaissance and the slaying of monsters.

MICE: Subject NIKITICH, ARIEL is in the business of killing and dealing information one way or another. We're still unaware of the depth of the intel at her disposal and in her possession but we have deemed it to be considerable enough to attempt contact.

Thus far, all attempts of gleaning information from her through use of sexual favors, blackmail, coercion have failed spectacularly. Attempts at using leverage against her have been met with immediate use of lethal violence. The agent engaging in semi-regular intercourse with her has not been compromised.

Reports from Agent [REDACTED] convey that it is unlikely that Ariel would slip up, partially due to lack of interest in inter-personal relationships and a glaring lack of trust in others.

ADVISORY: Keep under distant watch and allow Agent [REDACTED] to continue their investigation but avoid engaging NIKITICH, ARIEL directly. Once the investigation is concluded, we will reconvene.

Stuff like Buzzing, Black Signal are open to be discovered and can be used in-character!

The Venice Leaks file information is to your discretion: does your character have the know-how or connections to be able to pull that kind of info? If so, go for it!