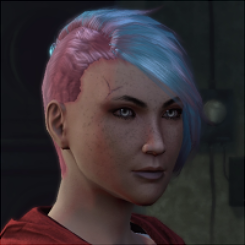 You're looking for a girl, goes by the name of Hopkins mostly. Annie Hopkins, known in some internet circles as Yarn. If she hasn't had the sense to change her appearance up--and honestly, the shock of what she just did might still be fucking with her--then she shouldn't be too hard to track down. Let me give you the deets.

Five-two, so she's pretty short. Kind of chubby, depending on who you ask. Definitely got a butt on her. Pretty pale, all those computer types tend to be, right? Lot of freckles. Pale grey eyes, dark eyebrows that kind of fade out at what I'd normally consider the halfway point. Scar near her right eyebrow. Old. Heard about ten different stories about where it came from while compiling this report.

Honestly, this whole description is unnecessary if she hasn't changed her hair. Looking for an undercut, naturally dark brown but dyed a mess of light pink and blue. Looks like she stuck her head in a cotton candy machine. It's like she wants to be found. I suppose if we're the ones to find her and she's got any sense it'll count as lucky.

Favours colourful clothes most of the time, most prominently a striped rainbow hoodie, but not a hard-and-fast rule.

Update from later descriptions, made for the purpose of tracking her down if she goes AWOL:

Okay, so this new Bee should be a good fit if we can get her here in one piece. What do I have here that might help you find her...

On 'Annie Hopkins' there isn't much. Born in Camden. Yikes. Other than that, not much of note. Parents divorced. Two siblings, both older than her. Doesn't seem to be all that close to them, but pop in on them if you have to anyway. A good a lead as any. College student, or at least she was. Shared an apartment with two others. They're the ones who put in her original missing persons report. We've already interrogated them, but no luck yet.

Got by on scholarships, it seems. Girl was big with the computers and all that mechanical stuff. And seems she had a bit of a reputation for being a shutterbug. I mention this because it feeds into the real interesting shit.

So, kid's got an online handle. Who doesn't, right? Handle called 'Yarn.' Thing is this handle wasn't just used for online gaming and weird chatrooms. No, no, no. Yarn is attached to her own little blackmail business. Not just blackmail, she'll barter for any information, but blackmail's the bread and butter. Turns out she's good at it. Getting into people's computers and mobiles, or finding those who have the dirt and trading whatever she has for their goods. Sounds like it started from getting compromising pictures at a college party and upping the ante to eleven.

So, kid has her business. Then she goes missing. We've had to piece together shit from there.

Turns out that there were some people out there--mid-level little crime ring with enemies that needed removing, and I won't even bore you with the name because they're absolutely irrelevant now--who wanted information that she'd stumbled upon. She demanded a price they weren't willing to pay, and they responded with... well, how else does anyone respond in that situation? With chloroform, basements and a lot of sharp items.

That was a month ago. Don't know why they even bothered holding her that long. If they don't pony up in the first week, it's not going to happen. But dumb muscle, right? Anyway, we picked up a good amount of buzzing from there. Ended up busting in to find eight corpses. Well, eight was the estimate. There were a lot of limbs and bits. And our girl, Hopkins? Nowhere to be found.

That skill with computers? That savvy at using it? And that level of destruction? I want her under us, or six feet under. See that she makes the right choice.

The following transcript is of an interview with the subject, two hours after she was located hiding out at a homeless shelter.

RECRUITER: Wow. I hadn't even said anything yet. And here I was about to ask how you were.

HOPKINS: Peachy. I'm peachy. I love being tied up. Let me out or I'm gonna splatter you on that wall over there.

RECRUITER: Yeeeeah, no. You think we're not used to dealing with angry bees trying to sting us? You're drugged, sister. Nothing's coming out until we give the say-so.

<Silence follows for a few moments before the subject speaks.>

HOPKINS: You know, don't you? So, you know what this is?

RECRUITER: Why don't you describe to me what it is.

<Sound: Hopkins making various approximations of what may have been intended laser sounds.>

RECRUITER: Please. Be more specific about the powers, don't just...

HOPKINS: It's like... I was five people for a moment? Then I was me. Then I was like three. Lot of multiples. And there was... lightning and my hands were everywhere... then everyone was dead. Good riddance to those fuckers.

<Sound: Hopkins spitting on the floor.>

HOPKINS: So, the hell are you?

RECRUITER: Believe what you want. But we got a lot of interest in your talents. Both the computer stuff, the information-gathering stuff, and the... well... the 'was-five-people-and-then-lightning-happened' stuff. It's all very valued here.

HOPKINS: What's in it for me?

RECRUITER: Money. Power. And a heck of a good time.

HOPKINS: ...Will you untie me if I hear you out?

RECRUITER: I'll untie you after you hear me out.

New recruit of the Illuminati, and thus doesn't have many ties to the Secret World yet.