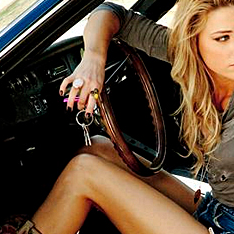 Anna Wolcott, or rather Anna Hitchen as she calls herself. A name taken in sacred matrimony, a proclamation of the eternal heart. Some names are worth more than others, sweetling, and her heart will always beat to her mother's rhythm.

There are dark places where dark deeds of dark pasts taint the world, taint the life that flourishes unwittingly, giving birth to things that will never die in this endless circle of wombs. A cradle for the depraved. Your species is no stranger to heinous acts, and the very earth remains stained with the blood of your victims. The very earth that Anna Wolcott grew up on. The red soil of the American South.

Strange fruit swaying from the oak trees, the vines taut with the weight of death as a mother's cries glisten in the wind. Anger, can you hear it, sweetling? The sound of a vicious alchemy brewing forbidden knowledge to exact revenge. Dolls of hair and skin and bone given names of living people, of the soon-dead. Candles made from suspicious tallow. These things smell of evil, the stench far beyond the rotting of the flesh that they lament.

Demons are like obedient dogs, they come when called and when evil fights evil, there is no good to drive them away again after. Devilry spreads, mixing from one pot to another until everyone's sipping from the same cup. It's when one family keeps that proverbial chalice that anomalies like the Wolcotts take form. When those demons refuse to leave the bed that was made for them.

The Wolcott family extends far back, deep into the hallowed earth beneath those creaking oaks whose roots suckle at their own excrement. Anna was the first from her mother and her mother's mother to feel the pull, but she won't be the last and the words her dead grandmothers whisper behind her eyes tell her tales of how she isn't the first. Witches, they became.

Innocent as she is, her blood carries the sins of her forefathers that her daughters will gladly pay for. The curse is a clever one, you see, disguised as a gift and when the nag is being placated with treats, she soon forgets the bit in her mouth.

After all, what is a host that takes without giving, but a parasite?

Anna is the quintessential southern belle of the modern era. Blonde hair, healthy tan, a taste for mint juleps, and a drawl to match that of sweet Miss Scarlett O'Hara herself. Most people tell her she's inherited her mother's good looks and her daddy's dignity and she'd be inclined to agree with them.

Even after moving to London, Anna has managed to retain her sense of southern style and wears it damn well amongst the Brits. Leather boots, cowboy hats, blue jean shorts and sun dresses are her favored attire, though she's been known to dress down some of the finer trends in European couture.

Another one. Yep, our blessed fucking mother-of-all has called another little bee back to the hive, and she never makes it easy. You know we haven't had to track a Wolcott down for fifty years? And now we're scrambling double time because she picked one to put the black and yellow on. Real cute, Gaia.

Wolcott? Oh it's a family name. An old one. Few of the family's living stock even use the name anymore, but it's what we call them to keep the filing clerks from busting a gasket.

We've been keeping tabs on them, loosely, for generations. Every now and then they'll pop out a baby who rips open a hole between dimensions and drags a demon out with her through the birth canal. You think I'm kidding?

A few hundred years ago some asshole on a plantation in Georgia named Howard Wolcott was a real hardass, to put it lightly. He did things to his slaves that make our Psych Intel procedures look like mild persuasion. Yeah, Howie was a real treat.

Anyway, as you can imagine he might've miffed a couple people off in his time and let me tell you, African voodoo isn't anything to tango with. It was a curse on his whole damn family, children and all. They died. All of them, except for one.

Unfortunately for her, one of his little angels lived to the ripe old age of bed pans and dementia so she had a chance to have kids. And those kids had kids. The curse lives on, yada yada, but only ever through the women of the family.

Typical, right? A man turns out as a fuck up and a woman is the one who pays for it. She doesn't know she's paying for it. She's just had weird dreams all her life about bad things that come true, sees things that don't want to be seen. No, they just think it's being special - until a toddler boils her mother's eyes out for taking away a toy. Or a man watches his young wife being dredged up from the bottom of a lake because she listened to the wrong voice one night. This sort of shit never ends well for them - but that doesn't mean they're useless to us.

So a Wolcott debutante comes into the world, stirs up the curse and sets someone on fire, gets "the talk" and becomes a bona fide witch. Of course we'd snag them up, I mean they're a pre-packaged dark magic user, super useful and they don't need an orientation. Thankfully, for the most part, they kept themselves tidy and stayed in the south where we could keep an eye on them. Then the age of technology with its Facebook and Skype and Twitter expanded the horizons of the uncultured. Eugh.

So now we've got Anna Hitchen. The latest carrier. She ran off to London once she graduated from a private Hogwarts in Louisiana. The only one of her grits-eating relatives to double dip from the bowl and the first to get a sip of the punch at all since before I was born. Both a witch and a bee, and she's buzzed off - pun intended - across the world to marry some cheap paperback author with a hot accent that she met online.

Get her on our side before she does something stupid, like find faith in tradition or whatever.