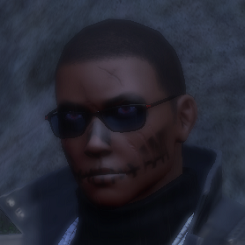 Growing up in the bad part of Brooklyn, New York and Alex was mostly known around the town as a "fixer" or "do it" guy. He'd do or "fix" anything for cash, from some abusive husband or wife, or parent needing to disappear. From some new gang trying to move in on their turf. And whenever they needed some heavy hitter on the front lines of some turf ward, he'd always be there. At that was simply at the age of sixteen. With age came experience, with experience came respect, with respect came a more solid position in the gang known as, The Brookers. From low thug-wannabe to a lieutenant. It was all looking up for him and the money was great.

Alex was just twenty when this all began..it all started with yelling and a gun shot, there was blood... a lot of it. All over the walls, something went wrong some type of drug deal went south at the docks and now some hairy mother****** was ripping and shredding its way through the gang's base. Hookers, bodyguards and so-on was like paper to this beast's claws. This wolf. This.. werewolf. The leader of The Brookers would've called Alex, who was currently in Manhattan taking care of some business, when he got the text there was some "monster" killing the entire gang and destroying their operation, he mostly thought of the local Spanish gang going insane due to crack. It didn't take him long to get in his mustang and push the pedal to the metal, it took him ten-thirty minutes to get back to the base. And what he saw... almost left him speechless. Cars ripped up, body parts from his friends scattered the building.. some of them smashed into the wall like bugs, others like they was trying to hide from whoever did this. Whatever did this. It didn't take Alex long to hear the chomping and ripping noises upstairs, where his boss was, he rushed upstairs! Pistols in hands, loaded and ready for... he stumbled. Something was wrong. His vision was blurry, his body felt weak, what the hell was going on with him. He all of a sudden felt weak in the stomach, like he needed to throw up... but not right now. Suddenly, the werewolf would turn and sniff the air having heard the stumbling black man trying to regain his senses. The beast quickly leaped out of the room and RIGHT toward the man, who'd still be trying to collect himself. But then he heard the bark growl of an supernatural monster, almost instantly he'd leap back and out of the way of the creature! Allowing it to smash into the wall, while it was there. He'd open fire, firing his Glock.36's into the back of the walled beast. But it only growled, sounding even more pissed off as it turned and shook off some of the bullets. With a huff and a strong lunge, it tackled the man through a wall and down the stairs of the building. But Alex wasn't going to go down without rapidly punching the werewolf in the face, before he'd grab the creature's ear and pulled it with all his might. Till the head would tilt, the beast obviously injured due to the rounds put into it. He'd then slam his elbow into the wolf's eye, hard enough for the eye to get squished and broke some of the beast's skull, where did he get this strength from.... but he couldn't think of that now. Before he knew up from down, the beast and him was on the ground level. The werewolf was whining, backing away from its prey.. but Alex wasn't backing away. He'd quickly get up and went to gather a couple of shattered glass from a few bottles. He'd place the shards between his fingers, before clutching his fists tightly. Making it look like he was Wolverine or some knucklebuster. Then this time he lunged at the werewolf, before he'd begin to punch the beast in the face as it was stunned, slightly, due to its elbow to eye encounter. The other eye, the throat, the stomach and the chest. The punching never stopped, even when the beast tackled him through the building's wall and into the back alley of the building. He'd just keep on kneeing it in the injured stomach, he couldn't stop.. punching it.. or kicking/kneeing it. Till he realized something, it was just a corpse on top of him now. Closing his eyes and let out a sigh- Then he heard it, rifles cocking and flashlights all aimed at him. He'd slowly open his eyes, as one of the gas masked soldiers would step over and said something that'd change this man's life. "Mister Smith, KG would like to speak with you." The agent offered Alex a hand.

Ex-Member of the Brooklyn themed gang, The Brookers. -Works as a bodyguard and sometimes visits, on the weekends, a club in Brooklyn called, Beneath, which is owned by his sister, Tasha Smith. -Is known to have been one of the agents deployed to Kingsmouth and Egypt, also to Transylvania. And also, one of the protectors of Agartha when the Filth invaded. May or may not have seen his file or heard his name during those times. -Not too known in the Merc, Bounty Hunter and Supernatural Hunter communities.

Supernaturally enhanced or enchanted. A trait which woken up, when he was near such a real and actual supernatural force. Changed his grey eyes to red, scans show his biology/genetics are also altered and almost not even the same person anymore, if looking at past medical records and now. Always seems to wear a cross necklace with the letters, A.S, craved on the cross. Also travels with a dog, with pitch black fur and blacker eyes. Where and how he got this animal or creature, is currently unknown. When asked by other agents, he merely says,"I'm watching him." Tattoo on face seems to be rather new, most experts say it is a warding tattoo, able to protect him from the Filth, possession and even corruption/transforming if bitten by a Zombie, Vampire, Werewolf or etc. It seems to be of an avatar of Death, possibly of the Grim Reaper or a Voodoo entity.