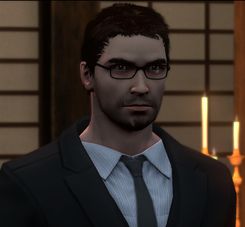 There is no log or person you can speak to aside from himself to figure out where Adrian came from. While the Ones Above have his true record, the truth has been warped through the years. The common threads are:

•Adrian Vvolk was a member of the US Army from the years of 2004-2015; in that time he worked for nebulous reasons and in a variety of unconfirmed warzones, each unable to be confirmed or denied when superiors are prompted. It's a common thought that he did wetwork for a PMC in Africa.

•He received his doctorate at an accelerated rate from Johns-Hopkins University in Baltimore, Maryland (US) in the field of Bioengineering.

•He was born and raised in the New England region of the US; though the town, state, and time frame varies wildly.

Since "Awakening", Adrian has been seen all over the planet in varying settings. Predominantly, he can be found in places of intense conflict or bloodshed, collecting samples and exploring around as if he'd never seen the most basic things. While his personal goals are unknown, it's clear he's a collector. Blood, bone marrow, trinkets, information - Everything is siphoned up when he passes through an area, leaving a trail of blackened, dripping corpses of those that would stop him.

On employment sheet at Immunomet, a South Korean biotechnical company, he is often seen on the campus and even among the other employees, though he makes no attempt to interact with them and is likewise largely ignored. When observed at this location, Adrian Vvolk seems to have a preternatural knowledge of observers and will often watch them in return. Often seen at "The Horned God" in London or roaming the streets of Seoul, his disposition is significantly different, often nursing injury or aimless wandering. In this state, he will often go out of his way to attempt social interaction.

While not personally professing any magical talent, Adrian Vvolk is very in touch with living creatures and what powers them. An accomplished Hemomancer (when he decides to use it) he will often utilize it to manipulate battlefield instead of jumping in on his own. Very much not the combative-type, he will often avoid conflict or let others fight in his stead.