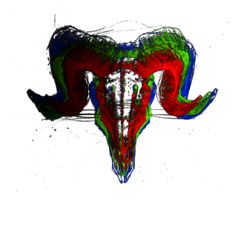 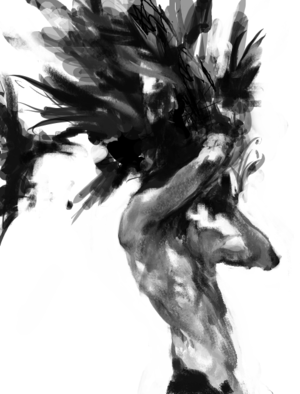 Faceless to all effects

Adam will always cover their upper face behind a horse skull mask, a sign of identity that they have taken as own. It also serves as some sort of symbology. While protecting their vessel's identity, one could say that Adam themselves is the mask in front of it. Their short-medium hair will always look red, although not a natural tone, and runs always messy, but they doesn't seem to care as they just slick it back. Behind the mask, the eyes will always have a red taint on them: both the irises and sclerotic. Under the clothing, the vessels are usually badly hurt (stabs, cuts, bullet wounds, burnts, electric damage...), but they seem to keep their functionality nevertheless. Adam is known for always picking fit, although not muscular, vessels, saying they're the most practical ones.

Currently, they have a single vessel of choice, a blood magick ran cybernetic body (similar to Orochi effigies, yet heavily modified and in a black base color) created by Abiteth. While initially simplistic and solely used to bypass their own demonic nature and impulses through programming, it has received multiple addons; electromagnets to hold blades in place, additional arms with freeclimbing capabilities and superhuman strength, wrist-mounted flamethrowers, a LED faceplate capable of displaying images...

It is also very hard to miss, whenever they are not wearing a hat to hide them, the pair of black horns that grow from the top of their forehead pointing forward, which might just be overlooked as part of their mask.

Clothing is not one of their worries. They can be seen wearing anything in a casual way, disregarding of any type of fashion or utility, so far as to be seen wearing bloody and torn police officer clothing. In case of need, they will wear different sets of armor from Hell materials. Strangely enough, though it isn't needed, they have continued dressing their robotic vessel.

Noone should worry about Adam being partially or completely covered in fire, as they will frequently set themselves ablaze with harmless flames for fun or entertainment. 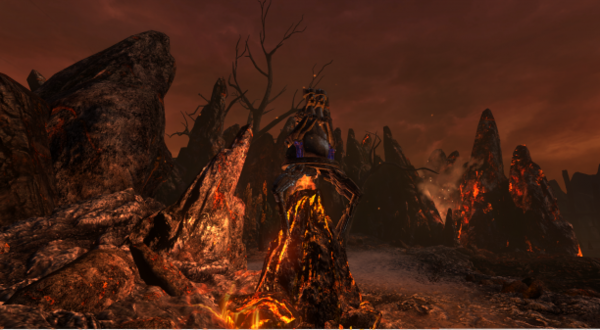 Voices speak, rumors spread. Un'Ga-Al:Unt-Al was presumably their first name, given to them by the one they were made from, a now missing Djinn which went under the name of Reshef. They had been a good warrior from Hell, but they had never visited Earth, for as most wars were factions and houses against themselves, brethren turning on each other for their leader's benefit. They had also never tried a meatsuit, but that changed when Reshef commanded them to get into a body of some Bee that had "died" in their domain.

Un'Ga-Al:Unt-Al was told to impersonate the human and gather intel, as well as any possible artifact that could shift balance in Hell's power. With time, they would end up with the very essence of angels within their hands, while also having to face a darker entity than themselves. Battles were fought, but they ended up subduing the entity to a certain degree, reaching to an agreement with it to partially share their vessel. This would not go well to their patron, who punished them for the consumption of the very thing they were sent to bring, little did he know that when unconcious, but their vessel still awake, the other entity would completely take over to smite them.

So was the hellspawn freed. That was certainly some conflicting situation for their nature, finding themselves with no orders to follow when they woke up. So they gave themselves a second name, Adam, which is the one they are most fond of. Adam soon found that they could choose, probably a side effect of the essence of angels being consumed and conflicting with their nature. They tried to be kind, to be a friend for those who they felt they owed their freedom, but they would soon hit a wall.

Human nature. How distasteful, those apes using their many benefits they did not even think were able to be revoked in other cultures, other natures, for their own selfish approach to existence, degrading all those who did not have a choice.

Adam's hatred for humans increased as they found out they were using all kind of creatures for their own gain. Speculating for money with the support of certain Hell factions. Hunting of vampires. Imprisonment and exploitation of various numerous races. They had spent some time in Hell, trying to show their brethren that there was choice, but those higher ranks who ran the wars for their benefit didn't like this. So they were given two more names, along with a stigma to carry on their own body and all their vessels, making them clearly recognizable may they try to interfere in Hell again.

Rejected by their kin and an outcast for all those they tried to give something better, they now keep traveling between Sheol and Earth, trying to be discreet while attempting to enhance the relationship between both sides.

Of course, their definition of 'discreet' has not gone far. As of recently, one of their previous faces had been published in news and propaganda, relating them to the murder of innocent police officers in London and various fires in the same city. If confronted and asked, they will just say it was an act of self defense.

They did, for some reason, achieve a job under Toolbox as a Requisitions Technician (that is, they are along with their supperior in charge of acquiring items people might ask them or Toolbox itself), and managed to keep it for some very long two months, even though they were very rarely seen actually working. They're also been seen a lot around Africa and Sheol, jumping between dimensions like they were chasing someone or something. For unknown reasons, Templars keep them in check even as they works for Illuminati corporations, so far as for to give them certain inmunity to their rules. It's been rumored that attempts to mess with them might bring some Inquisitors to check what is going on, so it is not advised.

As of recently, they have also achieved a somewhat pyrrhic victory on a higher rank demon that bound them to their previous vessel, Marchosias. This was, however, not without unknown help.

They have previously worked for Leviathan Industries, company leaded by Arkham Blackwell. Their formal title was "Dog caretaker", and even though the full nature of their job was under a strict NDA, they ccould be seen running multiple other chores for the company, if not for Arkham themselves. Adam did at some point get fired as Arkham claimed they ate some of the dogs they were taking care of.

There is, apparently, some existing relationship with Stardust Industries as well, or at least, Ash_Forsythe, since their main blade of choice has the hacker's logo engraved in it.

At some point, they achieved a relationship with Abiteth that allowed them to buy a robotic vessel after breaking free of Inquisitor Ardafravash's † binding and murdering the man. About the same time, they managed to hoard different breeds of dogs, including hellhounds, in location unknown.