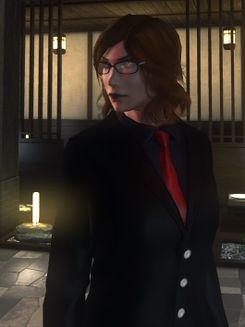 Our wisdom flows so sweet. Taste and see…

TRANSMIT - initiate the heautoscopic signal - RECEIVE - initiate the Tryonean mystery - IMITATION IS THE MOST SINCERE FORM OF FLATTERY - I never forget a face - WITNESS - Fifteen.

An identity thief before the act was crime de jour. A familiar face to everyone save the one staring back in the mirror. Does a facsimile retain the emotions and desires of the original? The changeling hesitates to answer, unsure. Does a replica bleed like the genuine article when poked, prodded, or cut? Fifteen can recall that answer far faster.

It was hiding from the Watchful Eye, from Big Blue Brother. On the run after a short but painful stint in captivity at the Canadian research facility. This replicant had no desire to be the plaything of curious researchers nor a pawn for ambitious middle managers. When the remote laboratory fell to chaos and darkness beneath the blade of the horse-faced assassin Fifteen capitalized on the opportunity. It escaped from its prison with a new face and new enemy. Now it travels south along the New England coastline, unaware that it walks into Mordor itself. Much like the Big Apple itself, the All-Seeing Eye never sleeps, nor does it forget.

What is now trivial act of cyber crime was once the territory of illusionists, and before that nature itself. Technology replaced magic replaced nature, lather, rinse, repeat. The doppelganger has lived long enough to see the cycle repeat in other aspects of the secret world and so it bides its time. There is safety in staying under the radar, but Fifteen can do so until age takes the operator and moss or vine claim the dish as their domain. Its kind are masters par excellence in matters patient and surreptitious. Your kind should take note.

It thinks of a time long before when doppelfolk were not as scarce. Seven hundred years plus since it saw the last other of its kind, though the memory of tribal infighting sends hairline cracks snaking across rose-tinted glasses. Doppelganger never created their own society nor kept their own history. Indeed, they didn't even bear names as a culture or individually. It simply wasn't their way. Adopting that of others was. To act as separate proved they existed, and every prosecutor knows that lack of evidence creates safety for the accused.

Fifteen was becoming hungry, a problem not solved with hotdogs of dubious origin. It was an appetite sated by absorbing the emotional output of others. How do you feel about vampirism, sweetling? A doppelganger needs to find someone who trusts or fears it or starvation becomes a harrowing possibility. Perhaps it was time to make a deal. "I'll render a service to you in exchange for your gratitude". It was suspiciously simplistic, benevolent even, but it never failed. Everyone wants something.

"Haven't we met before? You remind me of someone. I'm sure you get that all the time." The changeling laughs and reassures them of her authenticity. The ease at which humans accept what they see sharply contrasts the Golden Rule of the secret world: nothing is as it seems.

As a doppelganger, Fifteen spends her time looking like other characters; her current "facemate" is Illuminati agent Eleanor Koenig. While they are physically identical from outward appearance, Fifteen is considered an incomplete replica in that she only appears the same on the surface. To cut into or otherwise internally examine Fifteen would reveal that anything more than a few millimeters beneath the surface of her skin is a black viscous fluid. Only through exposure and emotional connection to her facemate can she further refine her replication into one being indistinguishable from that of the genuine article.

Given her pliable physical nature, harming her through mundane ways is somewhat difficult. She can absorb the impact of mundane strikes by lowering her density at that location, or she can increase her density at a given point to increase physical resistance, though as her replication is perfected she becomes more like her facemate internally as well. She has a finite mass and any changes to her form require her to have the requisite bodily function to form at the very least a mass "shell".

Fifteen is a natural fey creature and has a great susceptibility to magic and sub-zero temperatures. Her ability to resist threats is severely diminished when she is deprived sustenance, though it takes a remarkable length of time for her to suffer the effects of hunger if she is not expending energy in combat or to facemate.

Fifteen's strongest asset is her knowledge of the world thanks to the memories she has absorbed over the centuries. While she is not a genius of intuition, she has an encyclopedic level of knowledge from lifetimes of experienced facemates. Lastly, as a species unaffected by aging, she is incredibly patient.

Fey characters can detect that she is not human at any stage of replication perfection, and while physical examination cannot after a certain progression in replication, magical means can tell in almost all situations prior to a perfect replication. While it is said that she smells distinctly unusual, like a strange chemical, upon close examination by those with superior olfactory sense, there is no hard evidence that can be proven that she actually does smell differently than a facemate. Those gifted with supernatural sight can also determine that she is not the genuine article by looking at her eyes; they have red irises when truly examined, though inexplicably mundane people cannot seem to notice it even when it is pointed out, instead seeing the color of the facemate's eyes.

Fifteen is currently on the run from the Illuminati, from whom she has escaped captivity and experimentation. 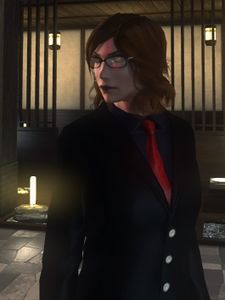 An identity thief before the act was crime de jour. A familiar face to everyone save the one staring back in the mirror.

"Haven't we met before? You remind me of someone. I'm sure you get that all the time."

The Golden Rule of the Secret World: nothing is as it seems.